We have run out of superlatives to describe the greater Toronto residential resale marketplace. Records have been broken consistently for the last few months, and September was no exception. Two records were shattered in September: most sales ever recorded for the month, and the highest average sale price for all properties reported sold. 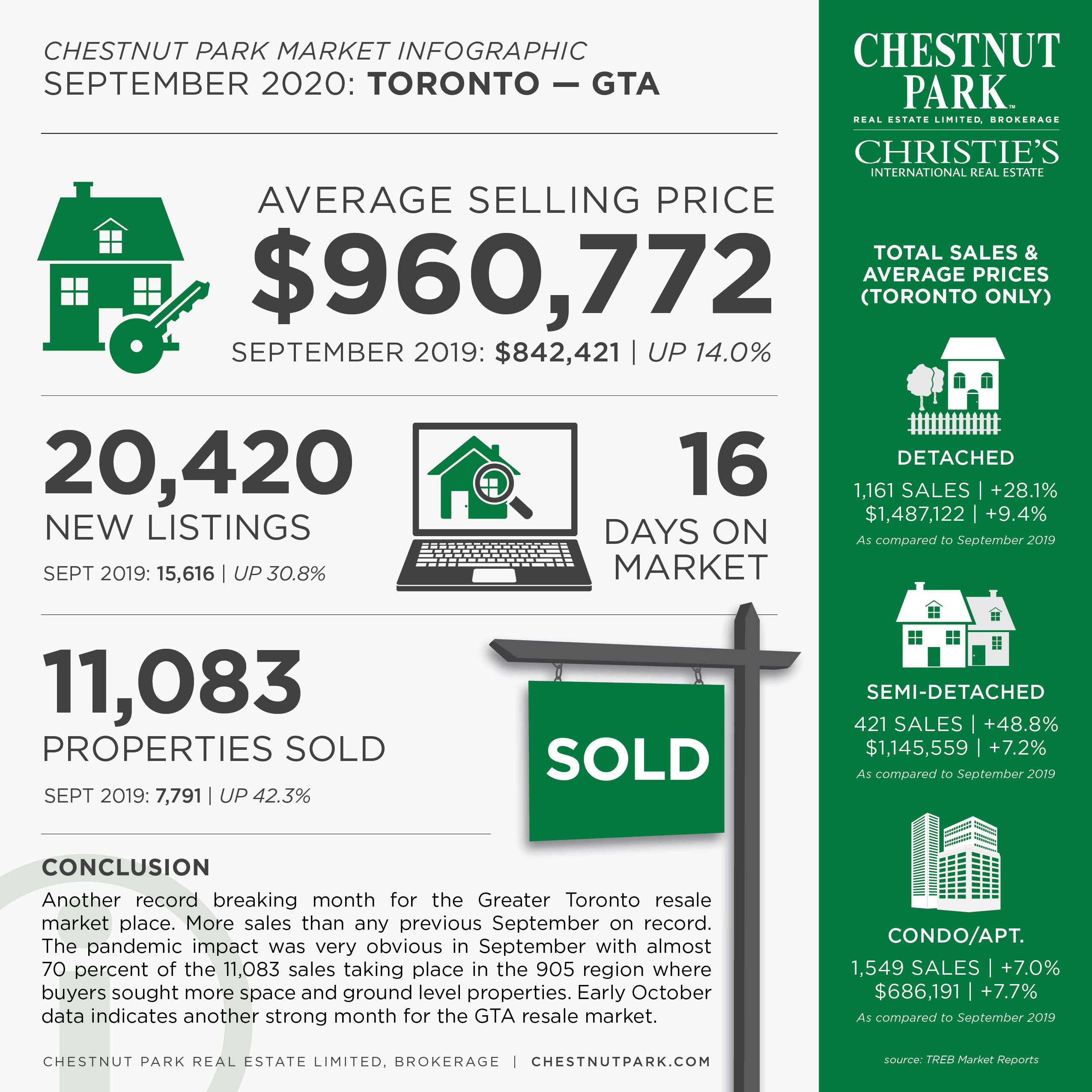 In September 11,083 residential resale properties were reported sold. This is more properties reported sold than in any previous September. By comparison, last September 7,791 properties were reported sold. This year’s sales were 42.3 percent higher than reported sales in 2019. September’s sales brought the year-to-date total to 68,793, 1 percent higher than the number of reported sales at the same period last year. This means that in the last four months the market has made up for the momentum lost during the implementation of the lockdowns and the provincial emergency measures designed to contain the spread of the Coronavirus in March.

For the third consecutive month more listings came to market compared to the same month last year. In September 20,420 new properties came to market, a 31 percent increase compared to the 15,616 that came to market last September. Due to the incredible absorption rate in September (11,083 sales), at month end there were 18,167 properties available to buyers, a mere 5 percent increase compared to the 17,254 available last year. In order to experience a balanced market, the marketplace would require an available inventory of at least 25,000 active listings. It is not surprising, given the absorption rate, that throughout the greater Toronto area all properties (on average) sold in just 16 days.

During the pandemic there has been an explosion of higher priced property sales. In September 461 properties having a sale price of $2 million or more were reported sold. This represents an 86 percent increase compared to the 248 properties reported sold in 2019. No doubt the need for space, coupled with historically low interest rates (5 year mortgage rates at less than 2 percent) have driven those that can afford it to larger more expensive properties.

September’s market data provides some empirical proof that buyers are looking for space and ground level properties far from the core of the city of Toronto. Although sales were strong in the city of Toronto – 3,555 sales which amounted to a 20 percent increase compared to the 2,987 properties reported sold in 2019 – that paled compared to what happened in Toronto’s 905 region.

Early data for October indicates that it will be as robust as September. Those buyers that have had not been directly and economically affected by the pandemic continue their quest to purchase properties that not only meet their needs but that can act as a sanctuary in these uncertain times. They do so while having access to mortgage financing at less than the rate of inflation.