In November only 4,544 residential properties were reported sold for the greater Toronto area. This is the lowest number of monthly sales recorded in 2022 and almost 50 percent fewer than the 8,979 sales reported for the same month last year. It has been almost 15 years since the market has seen numbers as low as those produced in November. 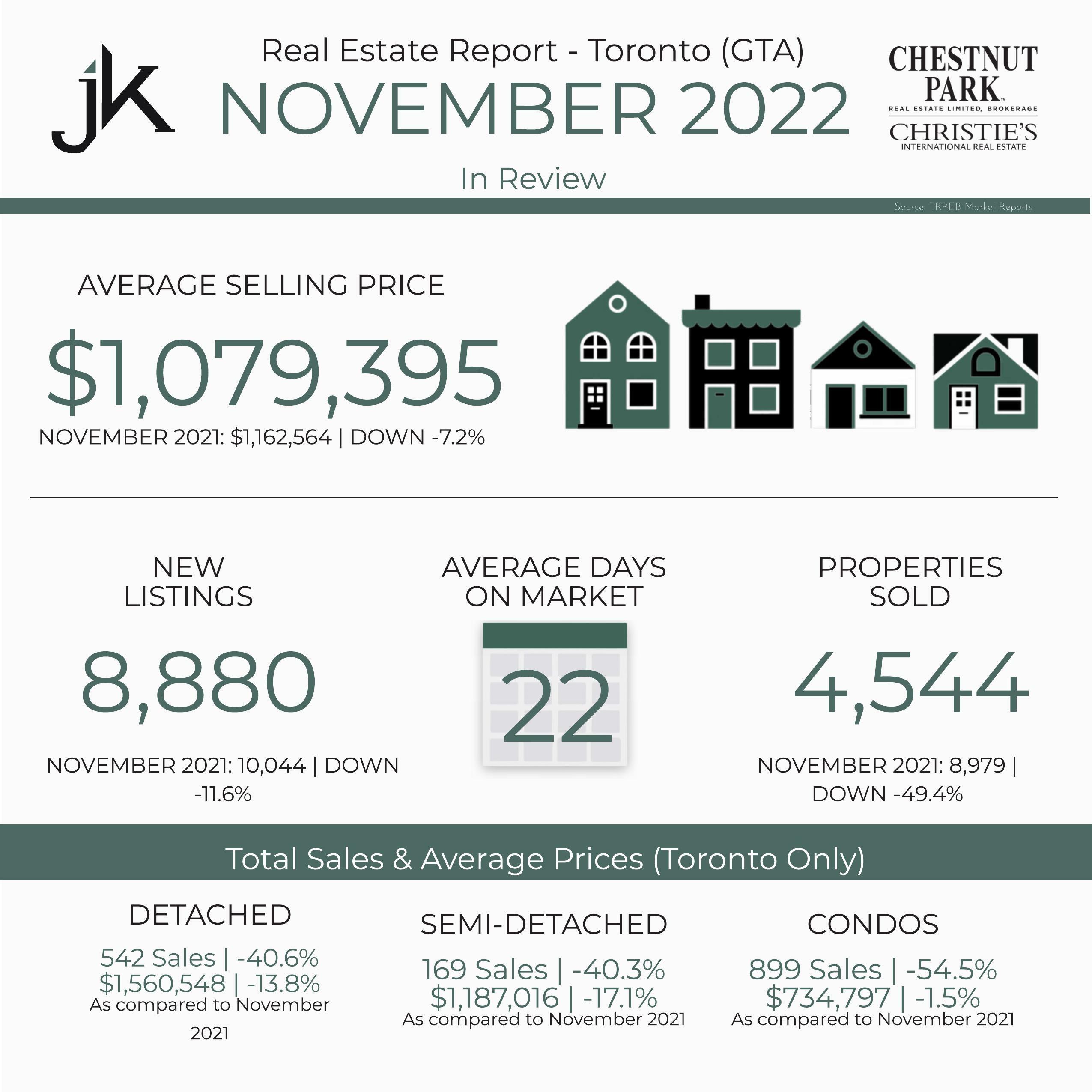 Average sales prices in the 905 Region have, since the pandemic market peak in February and March of this year, declined more dramatically than in the City of Toronto. The exodus from the city and its dense living conditions that drove prices up in the communities surrounding the city has greatly dissipated, and with that dissipation, average prices have declined.

One of the factors keeping average sale prices from falling below $1 million has been the lack of supply. In November only 8,880 new properties came to market compared to 10,044 last year, a decline in inventory of almost 12 percent. At this point in this evolving market, sellers are not under any pressure to get their properties on the market and sold. Most property owners in the greater Toronto area have locked into very favourable mortgage financing and it appears are prepared to wait for improved market conditions before making their properties available for sale.

Buyers are still in the market, notwithstanding the shifting market landscape. In addition to the lack of supply, they are constrained by the lack of affordability caused by rapidly rising mortgage interest rates and a wait-and-see attitude. Buyers are trying to determine if mortgage financing costs have stabilized and what their future direction might be, and if in turn home prices have reached the low point of their decline.

Unfortunately, it is too early to make this determination. As this Market Report was being prepared the Bank of Canada once again increased its benchmark rate. In February it was 0.25 percent, an unprecedented increase of 1,600 percent in only 9 months. It’s not surprising that buyers are on the market sidelines, wondering where the residential real estate market is headed.

As painful as the latest increase in the Bank of Canada’s benchmark rate maybe there is some positive light in the Bank’s most recent announcement. In raising the rate to 4.25 percent, it indicated that further increase may be at an end. In the past, all rate hikes were accompanied by announcements stating that further increases could be expected, and they were delivered. This time the Bank indicated that it will assess the inflation landscape in January and depending on its findings, only then decide if further increases are necessary. If the Bank concludes that no further increases are necessary at its next meeting, that will be the signal that the real estate marketplace that we have been experiencing is at an end. At that time and the resale market will begin to adjust to the new normal which will result in greater buyer participation and increased sales.