With one month still remaining in 2021, November’s reported sales brought the total year-to-date sales to 115,716 residential properties sold. We will finish the year with approximately 122,000 sales, eclipsing the previous annual record for properties sold in 2016. In that year 113,040 properties traded hands. As will become evident, given the supply problems the market is experiencing, 2021’s record-breaking accomplishment is not likely to be surpassed for some time, and definitely not in 2022. 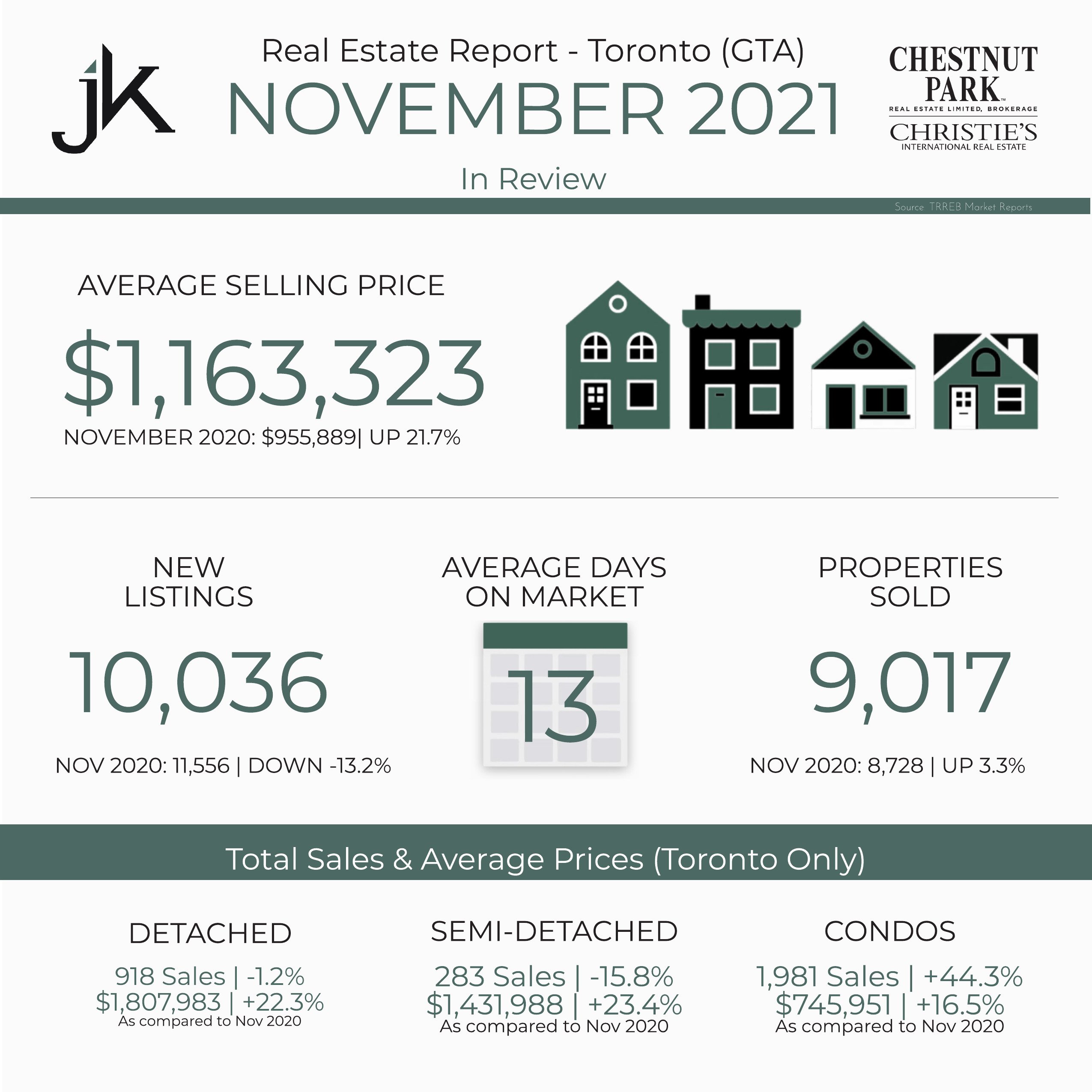 In November 9,017 residential properties were reported sold, also a record number for any previous November. Last year 8,728 properties were sold, 3.3 percent fewer than this November. The big news coming out of the November data, aside from the new records achieved, was what’s happening to prices and the region’s disappearing inventory.

The supply problem became even worse in November. Only 10,036 new listings came to market in November, 13.2 percent fewer than the 11,556 that came to market last year. Given the absorption rate – 9,017 properties were reported sold, almost the same number as came to market – combined with the few listings that realtors were able to bring to the market, we find ourselves entering December with only 6,086 properties available to buyers, an eye-popping 56 percent fewer listings (13,798) than at the same time last year.

In some trading areas, this number was, unbelievably, even lower. Durham region, which includes Ajax, Uxbridge, Oshawa, and Pickering ended the month with only 0.5 months of inventory. As this report is making clear, the 905 region is even more active than the City of Toronto. This is also evident in what’s happening to prices in the 905 region. In November, average sale prices increased much more dramatically in the 905 region than in the City of Toronto, including condominium apartments.

Prices continue to be lower in the 905 region compared to the City of Toronto, but as 2021 winds down that disparity is beginning to diminish. In the City of Toronto the average sale price for detached properties reached record territory at $1,808,000 and similarly for semi-detached properties, with prices coming in at $1,432,000. As we move into the last month of 2021, condominium apartments are the largest housing type available to buyers, but that supply is also declining, while average sale prices for condominium apartments continue to rise.

Given the enormous demand, stimulated by the expectation the mortgage interest rates will rise, perhaps as early as the first third of 2022, December, which is historically a slow selling month, to the extent that low supply will allow it, will emulate November’s activity – average sale prices will increase; inventory levels will continue to decline, especially for detached and semi-detached properties; sales will take place at the speed of light, the 905 region will outpace the City of Toronto in sales and price growth; and, as has been the case since September, average sales prices throughout the greater Toronto area, will all exceed asking prices, on average by about 110 percent.

The tension in the Toronto and area housing market (demand struggling with supply leading to record-breaking average sale prices) will not miraculously resolve itself. In order to increase supply all three levels of government, and particularly at the municipal level, must work co-operatively to intelligently free up land, increase density by filling the missing middle, and reduce regulatory and planning red tape and bureaucracy so that more housing can be built to satisfy the ever-growing demand at something approaching affordable levels.