Just when you think the Toronto residential resale market can’t reach new heights, it surprises us again. March was not only strong but it shattered records, something that is becoming a common occurrence. 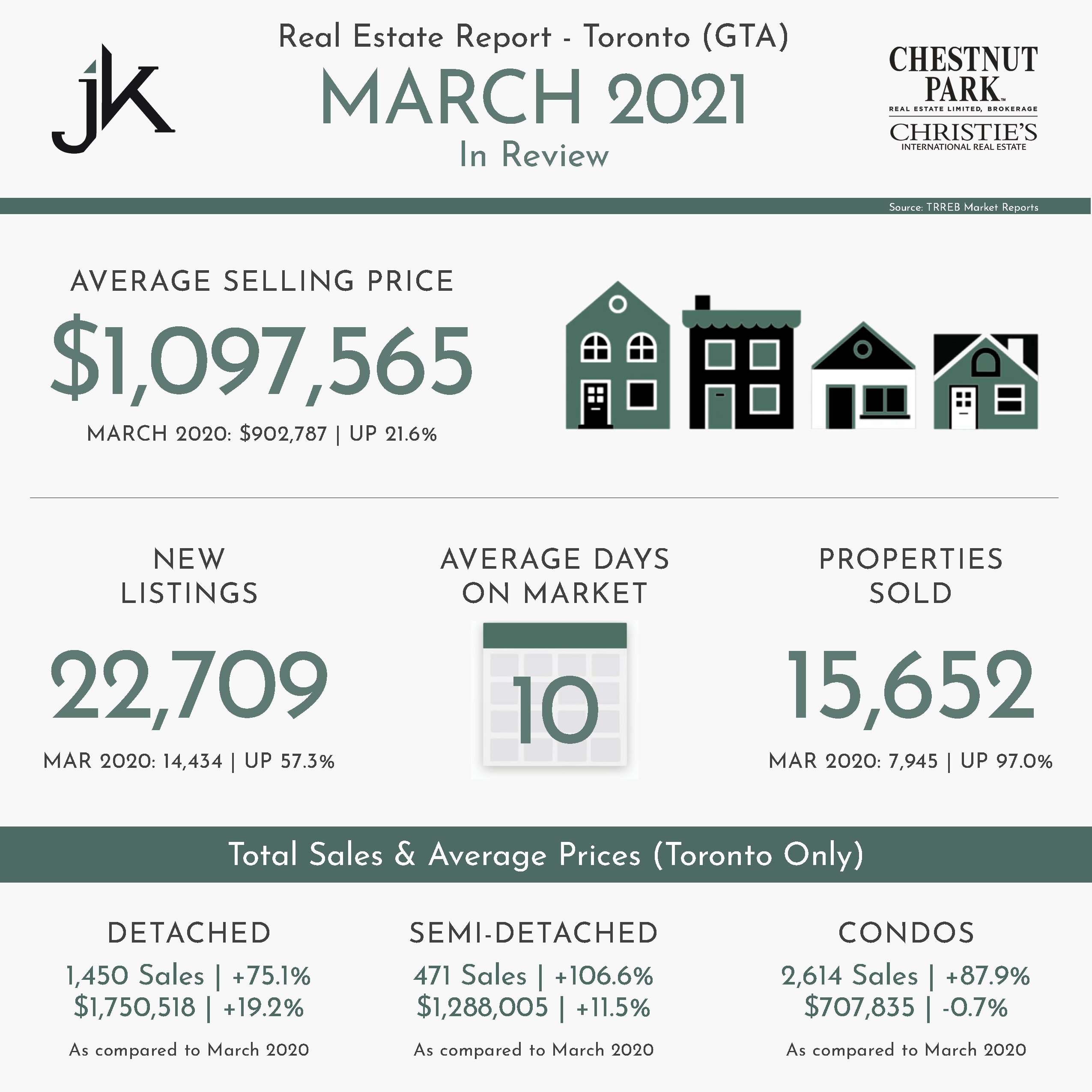 In March 15,652 homes were reported sold, an all-time monthly record and 97 percent more than the 7,945 properties sold last March.  Even considering that the second half of March 2020 was impacted by the implementation of Covid restrictions, March’s results are  nothing but extraordinary.

Not only was sales volume record-shattering, but so was the average price. The average price for Toronto and area came in at an eye popping $1,097,585, the highest average sale price ever recorded. This number is even more impressive when it’s remembered that it  included the sale of almost 4,000 condominium apartment units, the least expensive homes on the market, averaging less than $700,000.

The average sale price was unequivocally driven by the unbelievable number of high-end properties that were reported sold. In March  982 properties having a sale price of $2 Million or more changed hands – also a record! By comparison, only 245 sold in this category last  year, obviously a number dampened by the effects of the pandemic’s restrictions during the last half of the month.

The speed at which properties sold was also record-breaking. All 15,652 properties reported sold in March came to market and were  sold in only 13 days. There are no market descriptors that can define this phenomenon. At one time it was the eastern trading districts  in Toronto, in particular Riverdale, Leslieville, and the Beaches, that had speed of light sales. Now sales are taking place even in the 905  region at an incredible pace.

In March condominium apartment sales continued a resurgence that began at the end of 2020. Condominium apartment sales increased  by 87 percent in the City of Toronto and by 100 percent in the 905 region compared to last year. Although average sale prices increased  in the 905 region by 13.5 percent to $607,000, they remained flat in the City of Toronto at $707,000.

March had a bright spot for stretched and frustrated buyers. In March 22,709 properties came to market, a much-needed increase in  inventory, and 57 percent more than March of last year. It would appear that sellers are becoming eager to capitalize on the incredible  prices that were achieved this month.

This runaway market gives rise to a variety of issues. There is the issue of sustainability. The average sale price reached a lofty $1,097,565  in March, almost $200,000 higher than it was a year ago. Average household income has not increased proportionately. Far from it. Even  more worrisome, at the date of preparation of this Report, (April 8th), the average sale price in the City of Toronto was even higher at  $1,106,000, including condominium apartment sales.

When the sustainability of the housing market becomes an issue, it generates government scrutiny. Government intervention inevitably  leads to unwanted consequences, as past government intervention has clearly demonstrated. So there is talk of a capital gains tax on  principal residences and even a speculation tax. The best solution is an organic one – namely the market moderates itself because  households become incapable of paying higher prices, and more inventory comes to market. We are beginning to see signs of both of  these developments.