Not unexpectedly June produced a substantial negative variance when compared to the numbers that the Toronto and Region residential resale market produced in June of 2021. Rising mortgage interest rates have over the last three months caused sales to drop fairly precipitously, and although sales prices are off from their high of February of this year, they remain higher than average sale prices achieved last June. 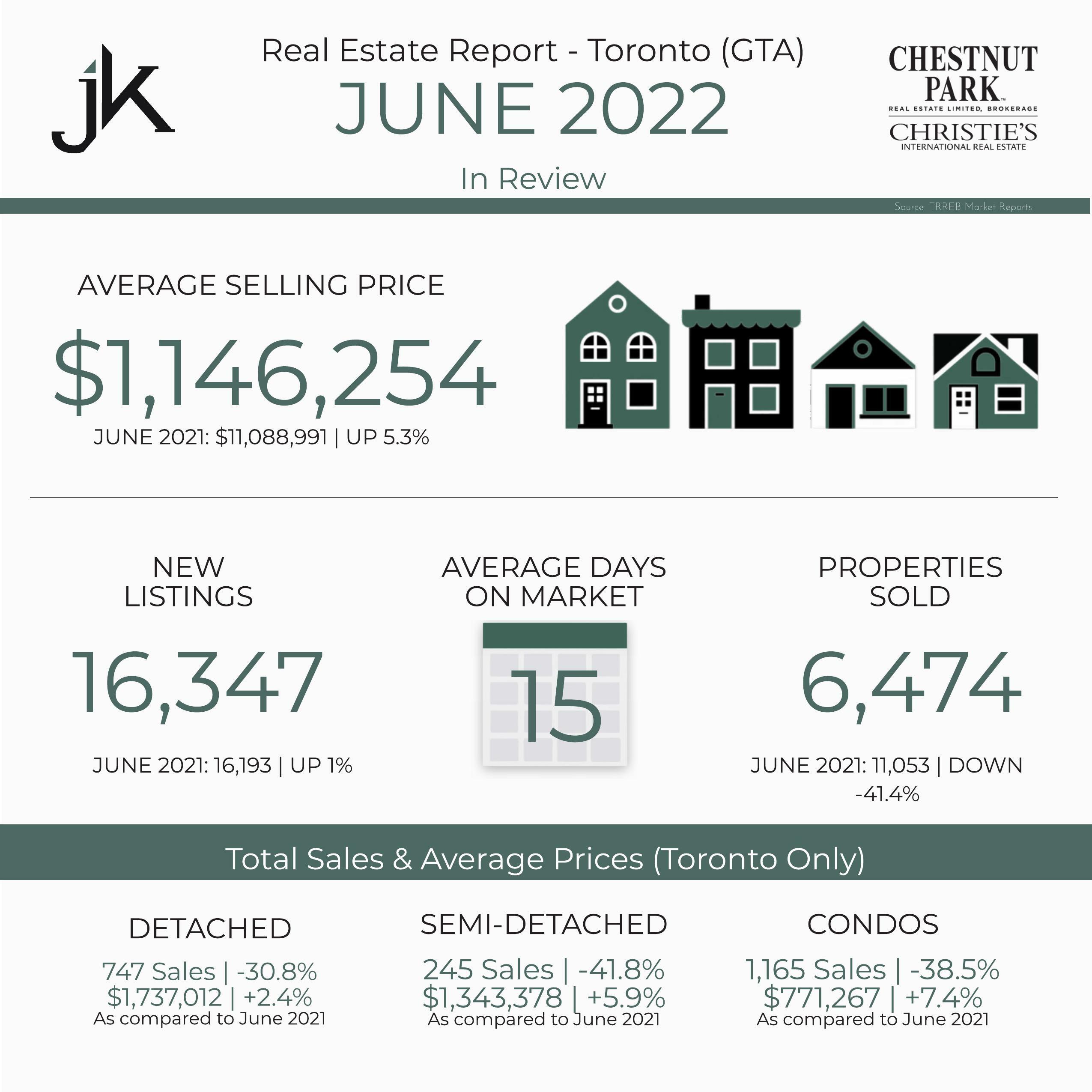 In February 9,044 properties were reported sold achieving an eye-popping sale price of $1,334,142. One could safely say that February was the height of the pandemic, liquidity-induced resale market. March produced more sales (10,902) but could not sustain the unprecedented average price. March’s average sale price dropped to $1,299,468. Higher mortgage interest rates kicked in April and since then both sales and average sales prices have declined dramatically.

As the above-noted chart indicates, since February the average sale price has declined by $185,000, or 14 percent, and since March, sales have declined by more than 40 percent. These declines can be charted in direct relationship to the increase in mortgage interest rates. Although declines in both sales and average sale prices will continue as the Bank of Canada raises its benchmark rate in its effort to fight inflation, those declines will be more moderate going forward, unless the Bank of Canada raises rates so high that it tips the Canadian economy into recession.

Interestingly, June’s numbers continue to demonstrate that the demand in the Toronto and Region resale market has not dissipated with rising mortgage interest rates. In June, all properties (on average) sold in just 15 days, only 2 days more than the 13 days it took last year. (This number may not be entirely accurate since it does not reflect properties that were listed and cancelled, then relisted at a lower price). Also, all properties reported across the region sold for 100 percent of their asking (also not an entirely accurate number) and in the City of Toronto at 101 percent of their asking price.

Regardless of the precise accuracy of these numbers they clearly demonstrate that there are many buyers in the marketplace searching to buy homes. As more immigrants settle in the greater Toronto area the demand will continue to grow and create the same market pressures that manifested themselves before and during the pandemic. They won’t be fully apparent until the Bank of Canada has inflation under some control and mortgage interests rates stop rising.

It should be noted that whereas during the pandemic (not that it is no longer with us) properties in Toronto’s 905 region sold faster and at higher prices than homes in the City of Toronto. That pattern has been reserved. As health and travel restrictions have eased, buyers are no longer looking for the space and safety that ground-level properties in the 905 offered. In June every housing type in the City of Toronto – detached, semi-detached, townhouse, and condominium apartments – achieved average sale prices substantially higher than corresponding counterparts in the 905 regions. Secondary markets – markets within 200 kilometers from Toronto – are similarly experiencing downturns both in average sale prices and sales.

The number of new listings coming to market will also have a substantial impact on both sales and average sale prices. In June 16,347 new listings came to market. This compares favourably with the 16,193 that came to market last year. However, due to declining sales, we enter July with 16,093 properties available to buyers, 42.5 percent more than June last year. If this continues buyers will have more choice, sale prices will be negotiated in the buyers’ favour, and more properties will languish on the market until they are sold or the listings cancelled.

Early indications in July are that the slide in sales and average sale prices will continue. Buyers are waiting to see how high the Bank of Canada will raise rates, and as a result how much lower prices will drop.