Market reports rely heavily on comparisons to the same month the year before. Comparing April 2021 to April 2020 would be pointless. Last April we were in the darkest period of the Pandemic. Buyers, sellers, and their realtors were developing and adapting to new, restrictive, and demanding industry protocols. As a result, there were fewer properties available for sale and even fewer sales. As a result, it is much more fruitful to look at what unfolded just this past March and compare it to April’s market performance. 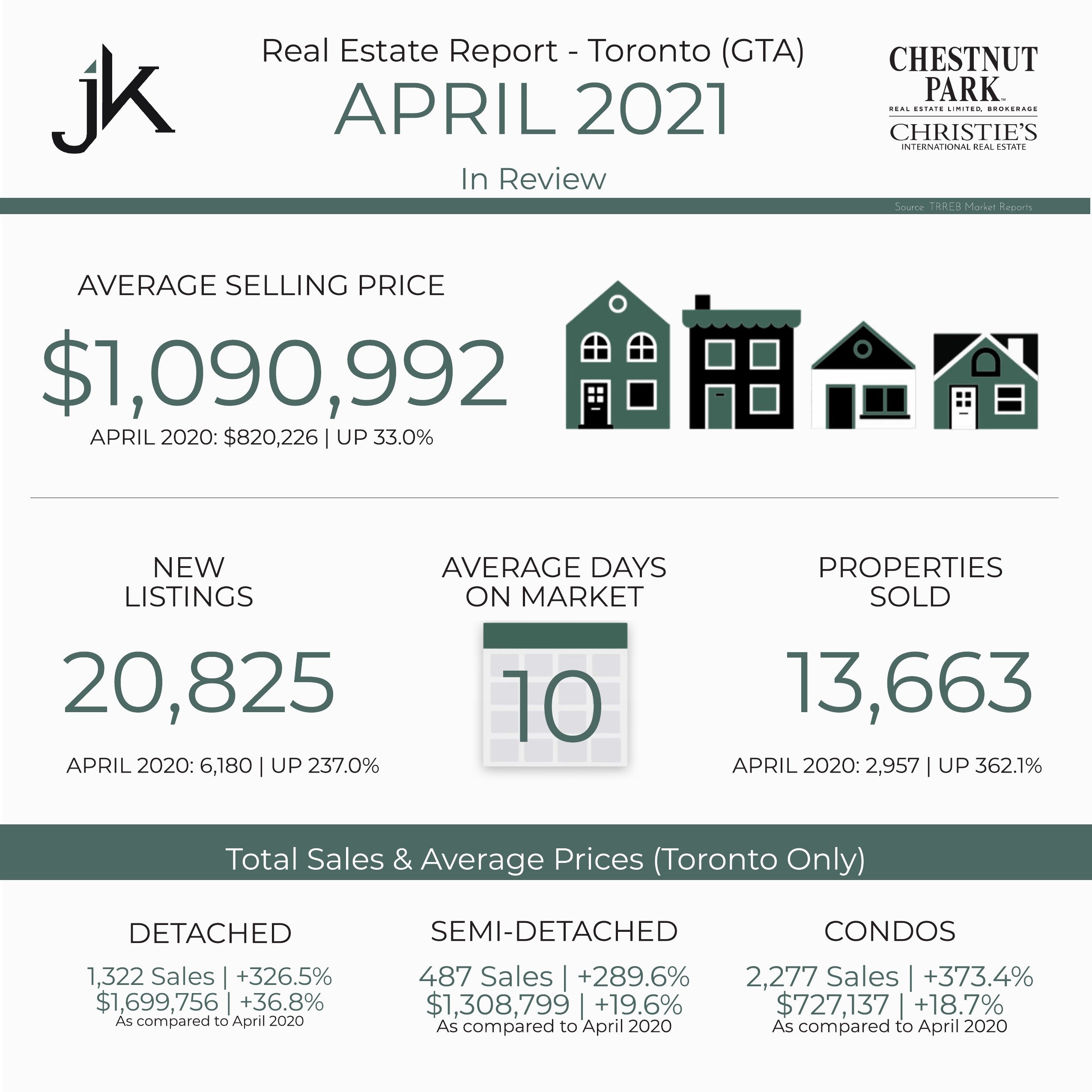 March 2021 was an all-time record breaking month both for the number of properties reported sold and the average sale price. April 2021 could not keep pace with the torrid March market. Having said that, April was itself record breaking, setting a new record for reported sales for any previous April. There were 13,663 homes reported sold, 12 percent fewer than the blistering 15,652 that were sold in March. There was also a marginal decline in the average sale price. March’s average sale price came in at $1,097,565. Although still eye-popping, April’s average sale price dipped to $1,090,992.The decline in price was across the board for all housing types, except condominium apartments. Detached, semi- detached, and townhouse property prices all declined, albeit marginally. In April the average price for detached properties came in at $1,699,756 (a 3 percent decline from March), semi-detached at $1,288,005 (a 1.5 percent decline), and townhouses at $942,371 (a 2 percent decline).

So, what does all this data tell us about the Toronto and area marketplace? Firstly, it was impossible that March’s pace could be exceeded or even equaled for a second month in a row. Since the beginning of 2021, 47,157 properties in the greater Toronto area have changed hands. Historically this is an unprecedent pace. What April’s data tells us is there has been tremendous buyer absorption during the last few months of 2020 and now into the first four months of 2021. Bluntly, the market is running out of buyers. With no immigration since last March, and with many city dwellers moving to secondary markets during the Pandemic, the number of potential buyers is declining.

Subject to an increase in migration to the Toronto area from other parts of the country and a return to pre-Pandemic immigration levels, the market has probably plateaued and in fact we may see a slight decline in sales as we make our way to the latter half of 2021. Similarly, unless there are declines in mortgage interest rates, the average sale price has plateaued at approximately $1,100,000. Looming on the horizon is the more restrictive mortgage stress testing effective June 1, 2021, which will place further restrictions on buyers’ borrowing power.